Gnutley Grange, another pizza saga and the techniques used.


Are you hoping for a prize for pun of the week

Lead me not into temptation,for I can find my own way
Top

Thanks George, I wouldnt go that far, it was just a quicky to see if it would work. Its just a mix of PVA, emulsion paint, black poster paint and course ballast. Mixed up to a thick paste, then applied to the post with a plastic coffee stirer, as simple as that

Maybe you could try drybrushing to give a bit of variation? 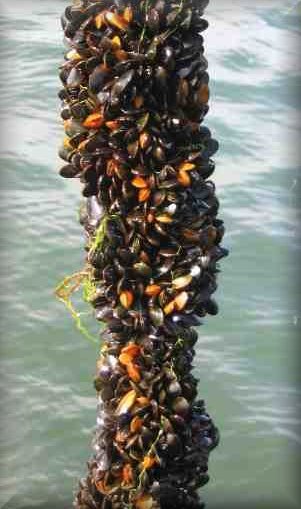 Not wishing to further hijack this thread, and since I'll eventually post pictures as well, I've replied on the Mussel Farming thread, here.
Gn15: Gnot so much a scale, more a state of mind
gnine: less is the gnew more
GnTonic - enjoy irresponsibly
Top

Maybe I should have put a few more on the post

Steve,
Don't you sleep? Perhaps you've got a workbench like on "Blue Peter" where there's always "one i prepared earlier" stored underneath.

Whatever the case, the tree stump & mussel laden post look good. I'll be trying out the mussel version when i do my seaside line.

Had another go at a tree stump last night, as I wanted to try and show the double cut from felling, thats my excuse anyway. No greenery added to this one yet, that will be done when it is installed on the layout. Yes, this one will be used

Then I thought why stop at a stump, a similar coating could be used on a tree. A few lengths of soft wire twisted up quickly to form the armature for a small tree, with the base done in a similar way to the stump, like so.

Like the stump, the whole thing was given a slurry of paint, glue and grit to form a base, then given a generous coating of textured paint. This very effectively hid the wire structure of the armature. This paint coating does stay quite flexible once dry, hopefully that will stop it from cracking and falling off in the future, one of the failings of similar plaster based coatings.

or my current thinking is to have it as a dead tree, with a bit of ivy growing up it. Need to think about this one.
Steve Bennett

or my current thinking is to have it as a dead tree, with a bit of ivy growing up it. Need to think about this one.

Looks fine Steve and I happen to Gnow that you've plenty of Birch seeds.
Go for dead and Ivy

Nice to see that you're not stumped and this thread is still branching out into new areas.

I like it - must have a go at the stumps..be good for wargames scenery too.. a couple of these on a base.
Martin Hogg
MOGTRAINS at:
http://mogtrains.blogspot.co.uk/
(all earlier sites sadly demised

I think it is a bit small to use real ivy for the stems Gerry, it is only 12cm high and the trunk about 1cm diameter. Should be able to find something though

MOG wrote:Nice to see that you're not stumped and this thread is still branching out into new areas.

Not thought about the wargaming angle, they are very easy to do, go for it. I'd like to see someone have a go anyway

The next door are having an extention added and I keep looking in the skip for modelling goodies. The electrician may be adding some flex from rhe wiring. Good tree material

Yes electrical cable is excellent for making trees, I much prefer making my own armatures than using natural material, thats just personnal preference though. Electrical wire is not just good for trees either, it makes good tufts of long grass, water reeds and the like.
Steve Bennett

It's funny how one theme can lead to another without really intending to. On another thread (http://forum.gn15.info/viewtopic.php?p=30612#30612) the subject of modelling Gorse bushes cropped up, so I had to have a go

. I wasnt totally happy with the first attempt, so had another go.

I would think that most here are familiar with twisting up tree armatures from multi strand wire, but if there is anybody who wants to know more, feel free to ask and I will do a quick step by step guide here.

Rather than photograph against a white background, i thought I would put them in a layout setting here. It doesnt really work that well, they need some weeds growing around them to look right really, but this is only temporary, for now at least

Now, awhile back in this thread, I said I would also show the failures

that was a bit rash, I didnt expect it to come so soon either

. I dont feel quite so bad though, as I managed to find an alternative use. The first armature I did for the Gorse bushes, was awful, the shape was all wrong and it almost went in the bin. Having it lying around on the bench though, an idea came to mind.
So here we go, it's a nice sunny day and Jon has taken a break from moving wagons around the yard and has got one of his Bonsai trees out to admire while he takes in the sun. Not quite the kind of wagon load you expect to find in a factory yard, but it beats carrying it

No problem, I have a specially equipped weedkiller wagon for Triffids, he will have to wheel it down to the interchange with the 15" gauge though.

That took some finding, it was ages ago that I posted that

T'would seem I must admit defeat.

Steve 'answer for everything' Bennett has struck again.


I 'spect that if Mr Bennett had been a couple of millennia earlier he would have said:

I came, I saw, I modelled it

To be honest, I surprised myself that I remembered it, a lot has happened here in the last 2 years. Here is the original post
http://forum.gn15.info/viewtopic.php?p=2877#2877
Steve Bennett

The tree is very nice indeed,I like the idea of ivy up the side.
Regards Michael
If you believe you can make something, you can make it.

Great little trees and bushes. You have far to much patience

DCRfan wrote:Great little trees and bushes. You have far to much patience

, you definately have that wrong, patience is something I dont have. These little things dont take long to make, stripping the electrical cable and twisting up the armature is probably the longest part of the process, even that doesnt take long on a small tree or bush. A job to do in front of the TV while catching up with what is happening in the real world, helps ease the depression

. Painting and adding the foliage is very quick and simple. Big trees though, that is a completely different matter, thats why there are none on my layouts

About time I added something here, has been a little while

.
Now this definately needs to be filed under experimental

I have no idea as to wether it will be of any use long term. Today I spotted some grass that had gone to seed in the garden, a reminder that the garden needs some attention. What caught my eye though, was the shape of the seed heads on the grass, they looked a little like miniature clumps of grass in their own right

. On their own they dont look great, but several together and the effect is quite promising. Over time they will obviously lose the colour, but so does the real thing at the height of summer, besides a bit of paint will green them up again. What I dont know yet, is if they will fall apart when they dry out, but I thought it worth a try and as by the time they dry out, they will be long gone from outside, worth posting it now. Somebody else might want to play too

I thought the cider sign looked familiar... I used to pass that farm every morning on the way to college

Korschtal wrote:I thought the cider sign looked familiar... I used to pass that farm every morning on the way to college

Small world Andy, i presume you lived in Wellington and went to college in Taunton

. I never really considered the sign until Gerry was looking for one for his layout, then all those times driving past it, must have left an impression, as it popped into my mind, as soon as he mentioned what he was after. Awful breach of copyright

hope they never see it

. Have often thought the farm buildings would make attractive models too, must stop and take some photo's one of these days.
Steve Bennett