Colin,
that is a work of art, all the detail is there but wonderfully understated, wish I had your eye, the colors and tones you have chosen really work together seem - would love to see this in the flesh
Gordon F
Top

Not a lot to report on at the moment on this project I'm afraid, I've been busy with other projects, plus I've had a few struggles in the field of pipe bridge building.

As ever during a break in a project, I've been doing a lot of thinking, and there is a chance this little layout may not progress as planned. At the back of my mind is an idea to revive an older scheme for a shuttle module controlled diorama for the Lister, shuttling up and down with a single wagon (would save building any more

). I would keep the works building for this 22 x 4.5" scheme and the Ambasador's baseboard would be put aside for future re-use.

Thats sad Colin, it was progressing so well and looking great.
But, if it is not working for you, it is probably better to put it to one side until, hopefully, a solution can be found, or the parts are needed for another project. Be nice to see it finished, but you cant force these things

Progress (or lack of) report time....

At the last report I was considering an alternative plan, which did indeed get started, but was causing problems of it's own. Two features I was particularly proud of were a Peco O-16.5 'Y' point with all the between the sleepers webbing removed and the way I had managed to bury a lot of the track under the ground (well, filler). So a small chunk of the foamcore surface of the board was saved and the rest went in the bin.

What was left has become a nifty little diorama, hanging basket liner grass has been enhanced with scenic materials and a concrete area with cracks added. I have used some more Green Scenes leaf litter but mixed with dried, used tea leaves as mulch. 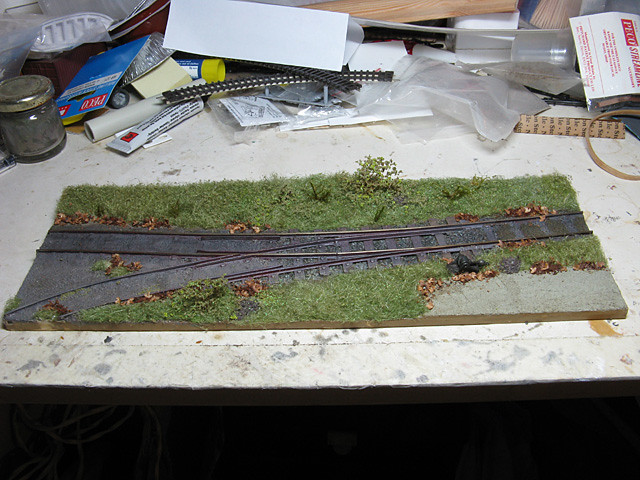 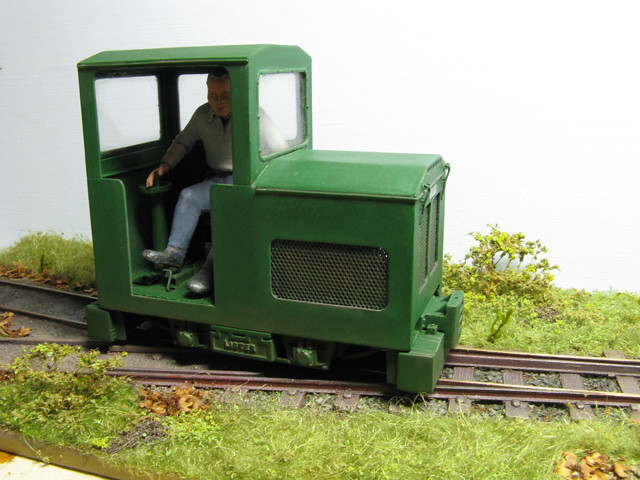 So no further to having somewhere to run the Lister, I have concluded Ambasador's is too small, but I have a nice diorama in a display case over the desk!

I really like the ballast at the left hand side, the way it becomes a crusty layer of oil, diesel and dirt.
That is so reailistic

I really like the ballast at the left hand side, the way it becomes a crusty layer of oil, diesel and dirt.
That is so reailistic

I wanted to show that not all track is perfectly ballasted, indeed much industrial track hasn't seen a lump of ballast since the day it was laid! As and when I pick up the batton on Ambassador Works again I plan to carry out similar treatment on the track, and to enhance the grass in a similar way too. Just need to make my mid up as to what I am doing first...

Yikes these layouts are getting smaller and smaller

Definately more of a diorama this one! No wires in sight....

I need to tidy up the edges of the piece and add a few Sidelines bits and pieces of 'clutter' to finish it off. Oh, and the wagon needs painting too!

Colin Peake wrote:As and when I pick up the batton on Ambassador Works again I plan to carry out similar treatment on the track, and to enhance the grass in a similar way too.

I must have picked up the batton.... 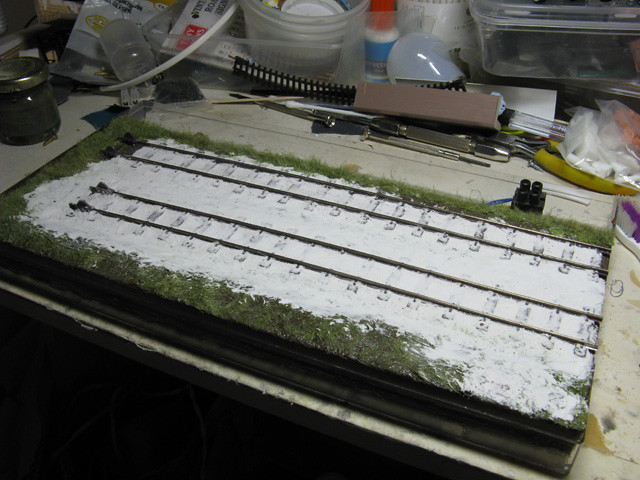 No, it hasn't snowed! I have set most of the track into filler (151 Lightweight stuff from Pound World) to get that 'grunged in' look I achieved on the diorama. The front siding has been shortened slightly to allow an oil drum or brazier to stand at the end. Next step is likely to be respraying with the red oxide, matt black and grey primers to get the colour base back for further treatment. Grass at the front has been trimmed right back and coated with PVA so an improved treatment can be applied in due course.

The eagle eyed may notice that the little tabs on the outer rails that located the sector-cassette have gone. When the time comes I plan on a new simpler cassette with tabs on that, hopefully taking the power too.

In other news, the chappy to stand in the works doorway is painted. He is of Italian/German parentage (Italeri body/Preiser head), painted using acrylics over a black base. 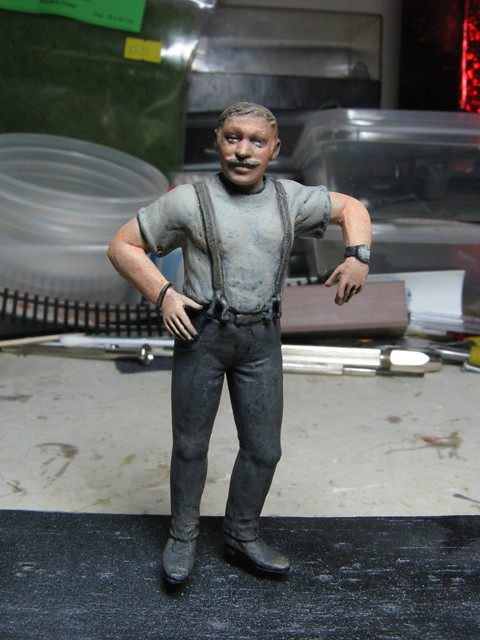 Colin Peake wrote:Just need to make my mind up as to what I am doing first...

This has yet to be resolved....

Ooer.. a burst of action up in Worksop!
I'm determined to get some other stuff to a level of finishedness before I pick up Gn15 again.. it's too infectious

MOG wrote:Ooer.. a burst of action up in Worksop!
I'm determined to get some other stuff to a level of finishedness before I pick up Gn15 again.. it's too infectious

Well the 009 is looking OK Martin so what else is up your sleeve?

That's a great paint job on the figure - I like the contrast between the smooth skin tones and the slightly textured t-shirt + denim.

God I missed this first time round...I wondered why you wee saying a Gn15 Cyril was easier Colin

I'm rapping up all my figures up and sending them of an around the world trip to you for a quick C. Peake Job

Thanks for the comments on the little folks chaps, they appreciate it!

This morning the track and ground surface had a dose of the 'three colour spray'* - i.e. red oxide, matt black and grey primer. Had to pop down the street to the motor spares shop for more black but hey... 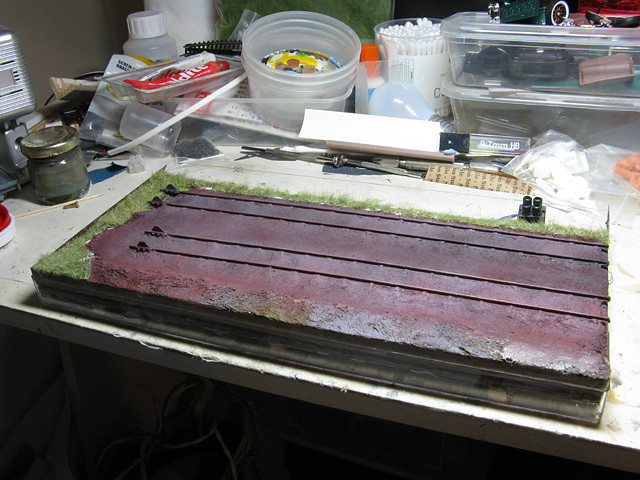 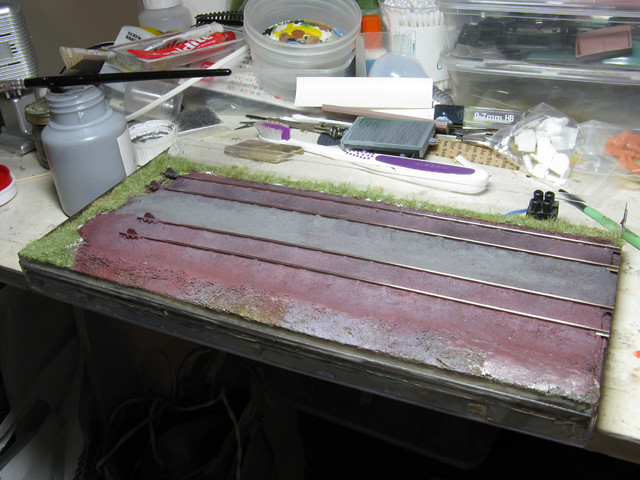 It doesn't really show in the pictures but the red oxide colour does actually show a little under the grey, resulting in a nice warmth to the ground colour. This is pretty much the final colour bar some weathering. 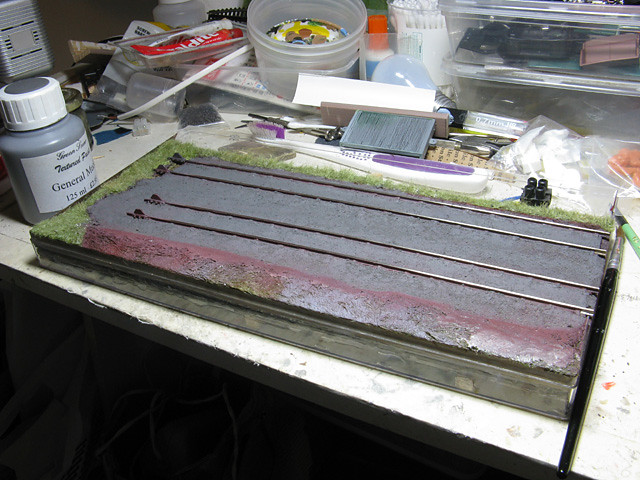 After the last picture was taken I added a small amount of ballast around the sleepers top right, and some Games Workshop 'Graveyard Earth' paint to the front embankment, but allowing some colour to show through again.

*Don't worry, it's not something you can catch.
Colin Peake

Firstly, something I have been wanting to try for some time, Steve Bennett's balsa fence building technique (http://forum.gn15.info/viewtopic.php?t=1242). 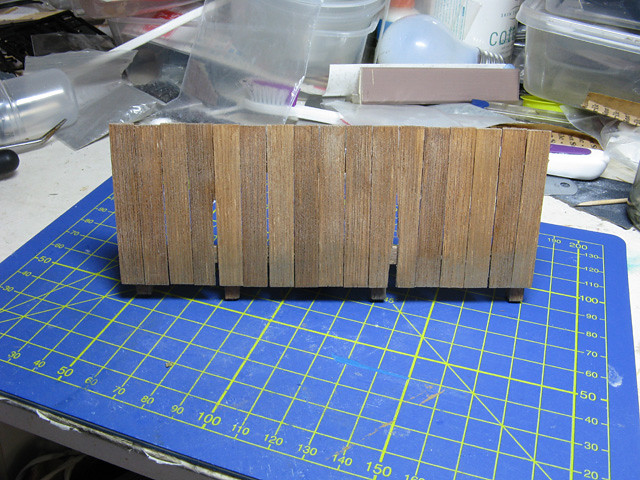 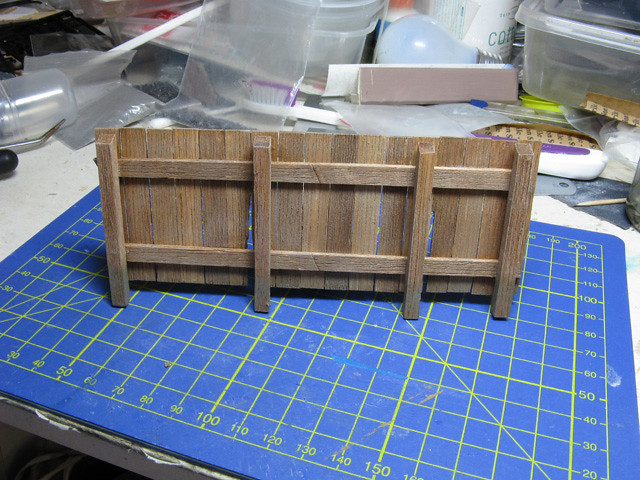 I think it has come out reasonably well. I used a wood stain from Wilkinsons which according to the tin has an acrylic formula. Once the assembled fence was dry I dry brushed with a grey/brown mix and the bottom bits with a dark green textured acrylic paint to get the grass/muck stained look.

Next was a short piece of walling to fill the front right hand corner, not so much a view block but more of a distraction!

This is supermarket pizza base with brickwork scribed with a technical pencil, with a layer of 3mm foamcore in the middle. The capping bricks were individually applied using 'no more nails' as mortar!

On the ground the grass has been re-applied and looks much better now, plus I have added leaf litter as per the diorama (Green Scenes leaves and dried tea leaves). 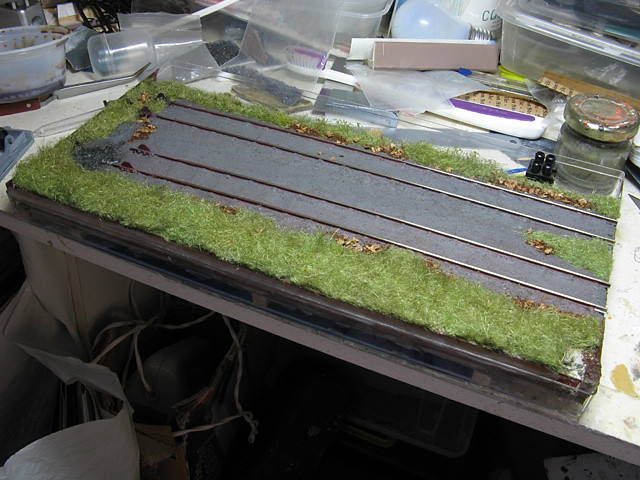 An overall view of the micro layout as it now stands. I need to revisit the building to blend it in to the revised scene and fill that doorway with crates etc. 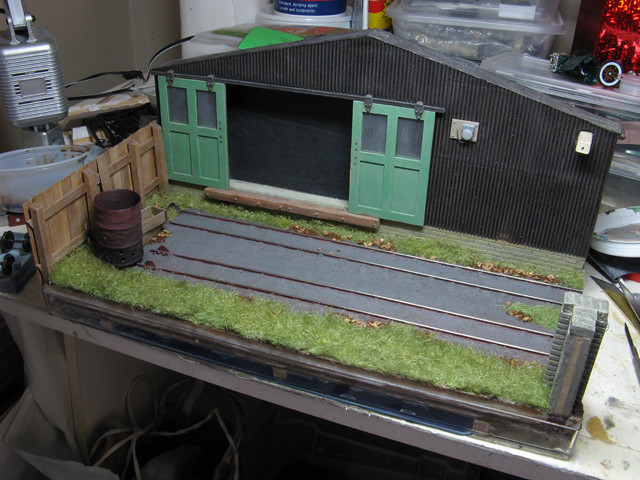 A close up of the Sidelines brazier and cases: 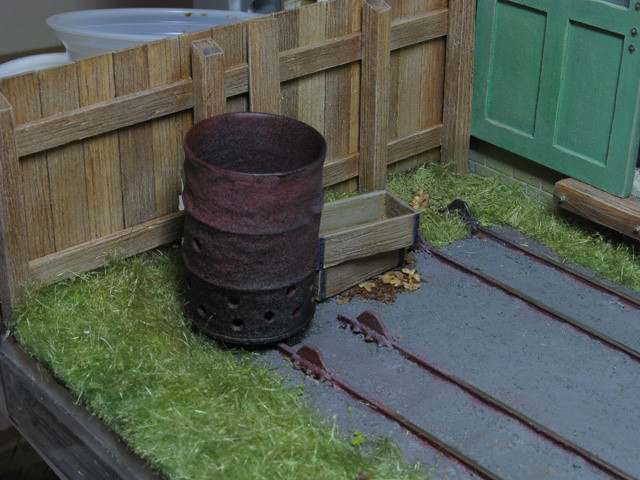 The brazier was painted using the red oxide/matt black/grey pimer method as per the trackwork, I will add some more rust using weathering powders in due course.

Colin.....
excellent work....
Will have to try out the "spray mix" as I have some
rusty wagons to paint
Also great looking Lister is there a thread on it ?
did you carve the brick post ?

joe gilmartin wrote:Colin.....
excellent work....
Will have to try out the "spray mix" as I have some
rusty wagons to paint
Also great looking Lister is there a thread on it ?
did you carve the brick post ?

The Lister build is described in detail here: http://forum.gn15.info/viewtopic.php?t=3792

To expand on the brickwork, this was simply drawn onto the foam sheet using a pencil, which is enough to emboss the brick courses in. I drew out a large enough area to use and then cut bits as required, and assembled around the foamcore inner. One day I'll do a step-by-step!

Wonderful work Colin I especially like the bricks on the post. it is amazing how much one can do with very little expence. I will keep watching for the little details.
Regards Michael
If you believe you can make something, you can make it.

Thanks Ian, though I note you haven't quit lately

OK, time for an update... Not a lot has happened of late as I've been devoting a fair bit of time to the Miniature Railway Museum Trust. However, yesterday I was due to go and help with a 15" railway belonging to another of the 'Gnotters', but that was snowed off so I found myself with a free day. So, progress!

Last month I found the time to mock up the interior detail that would clutter the doorway: 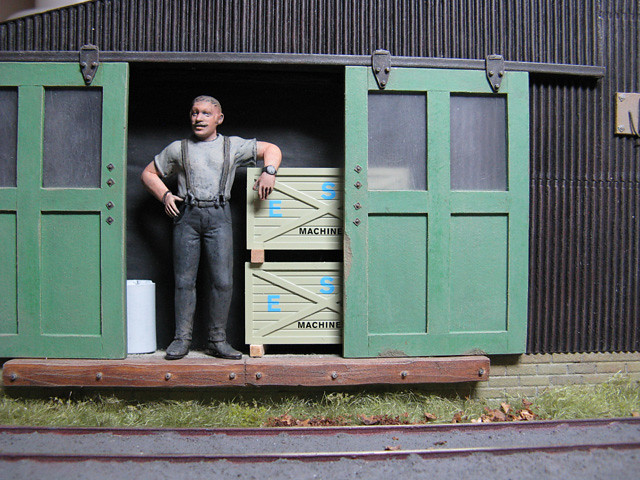 Packing cases are the Hornby OO gauge 'Lowmac' load, which cut carefully has made three cases in G (you can't see the other, tucked behind the left-hand door). Painted and weathered they look suprisingly good. Oil drum is a Sidelines casting with an old Mabex 'BP' transfer: 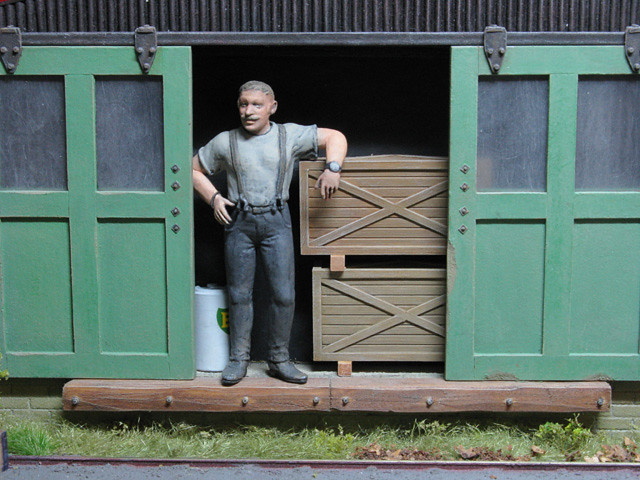 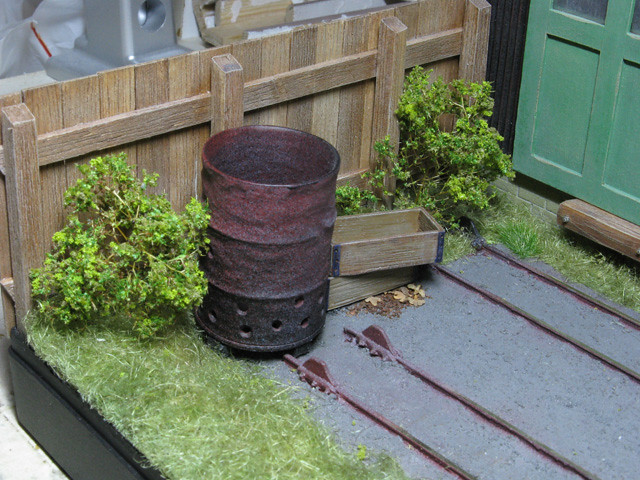 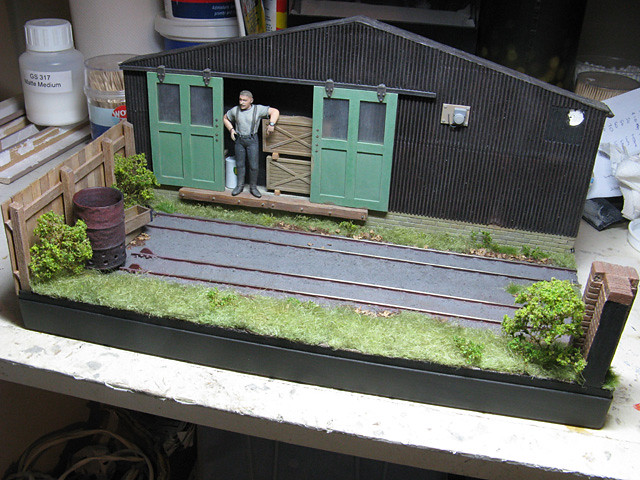 The edges of the chocolate box have now been painted, but I'm not sure if I can live with the cut-off of the wall at the baseboard edge painted black like that, I may re-think this and have the wall collapsing. The eagle eyed will notice that the piece of wood at the right hand end of the warehouse that was to carry a pipe has gone, on closer inspection there is a square cut out ready for... 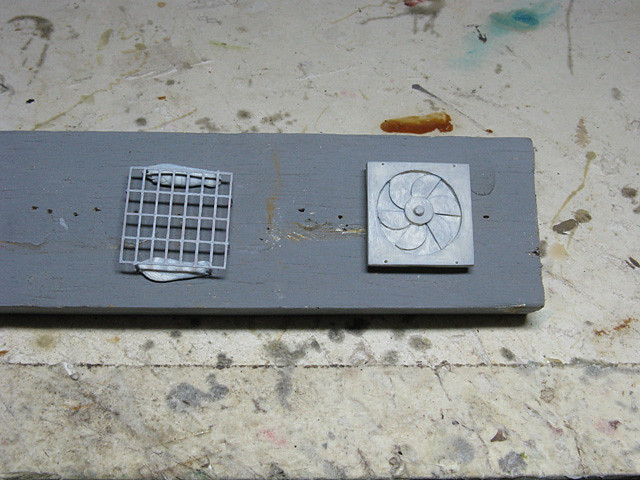 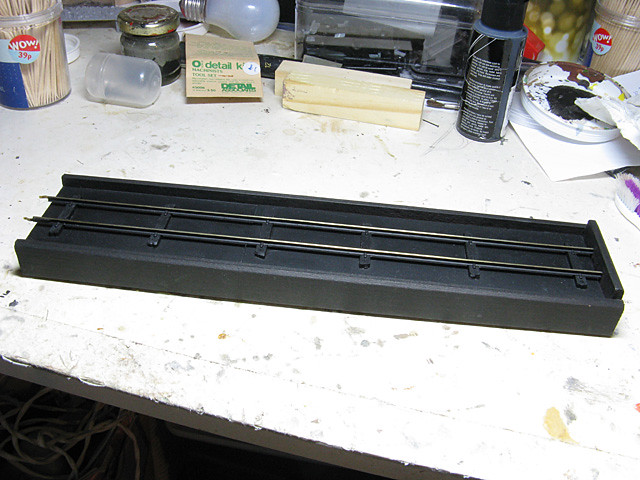 (Yes, I am running out of sleepers!)

Other than adding the now painted fan assembly, seeing to that wall and adding a sign somewhere about the place, I think that is almost it for now...

Great work with the detailing. I know this is rather late to make an observation but I've only just noticed the warehouse roof is very low. I make this observation as you have a couple of pretty hefty boxes in the door but I don't think there is sufficient height clearance for a forklift to operate in the building.

DCRfan wrote:Unless of course they are making pingpong balls or something equally light

I'm sure there is sme nifty bit of kit they could have in there. Failing that it is set in the days when labour was cheap!

They might have been using pallet trucks for the loaded crates, and stacked the empty crates by hand.
Barry Weston

Users browsing this forum: No registered users and 8 guests