About time I said hello....

With apologies to Flanders and Swann (The Gnu Song, if you must know), this forum is for all those "Hi", "Howdy" and "This is who I am" messages. If you're introducing yourself, please start a new topic (unless your somebody else's alter-ego, in which case seek professional help)

About time I said hello....

Having been registered on here for over 5 1/2 years, I suppose I had better belatedly introduce myself.
I may have already done this.......although my post count shows only 3* I'm sure I have posted more times than that; has some stuff gone missing?
If it has, it's probably gone the same way as most of my brain cells!

Anyway.......I work on the railway at a small station near Ashford, and have modelled in various (too many) scales and gauges.

My Gn15 output so far consists of a little pizza layout I built in about 2008/9; some of you may have seem it at MOMING in Pewsey back then and I think Steve Bennett took some photos which ended up on here somewhere.

The only stock I had was a Sidelines "train set" I bought at the Telford show in 2008; this consisted of kits to make a small battery electric loco, two v-skips and a tool wagon.

Part of the reason for re-kindling my activity in Gn15 was the discovery at Amberley Rail Gala recently of six Sidelines wagon chassis at a bargain price; I also had some resin parts to form the basis of a small I/C "critter", some PECO 0-16.5 track and points and another cheap acquisition; a set of Fujimi garage mechanic figures, cut off the sprues but still in assembled and boxed for £2!

Like a lot of modellers, I have a few surplus baseboards kicking around waiting for something to do; the one in question being just under 4' long by about 8".......I'm sure I should be able to fit a little layout on it, and when I do I will start a separate thread.

A couple of photos of the possible new layout....... 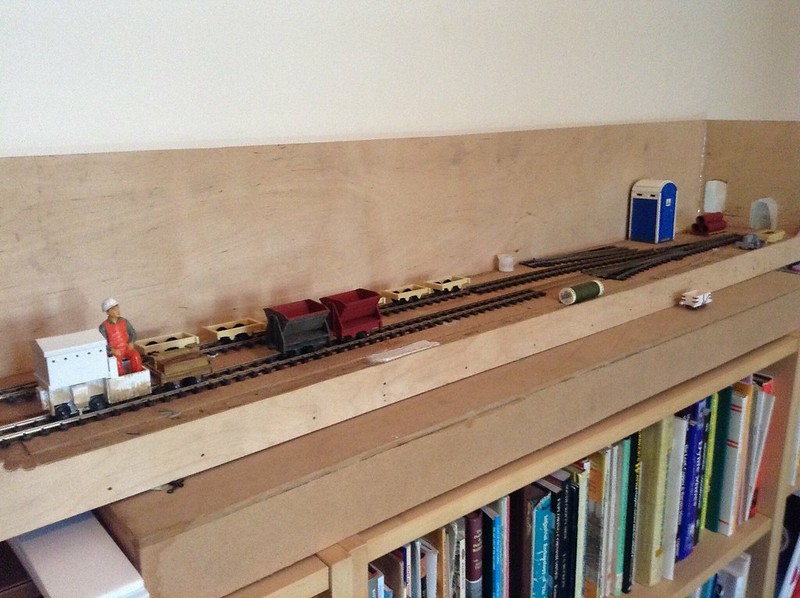 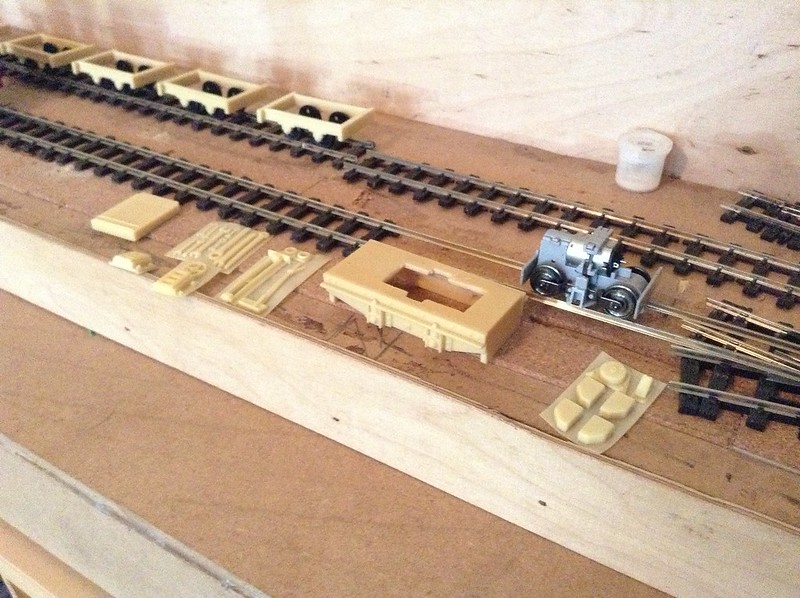 *this will be the fourth.....does that make me a four-poster?
Simon H
Top

I hope it's not your fourth and last post.
Nice start for your layout. Can't wait for further pics.
Chris
I'm free to do what I want anytime !
Top

It looks like you've got a good few options to get going with.

Hello Simon !
You have some very cool equipment on your roster. Looking forward to see what you come up with. 8 feet of baseboard is great and potential for a lot of detail and operating fun !!!
http://www.myspace.com/underworldimage
Currently on tour with Sleeper Cell

Listen for me mornings 5:30-10 89Xradio.com
Shooting video for MTVs Making Of A Metal Band
Top

I've been on here for about the same time as you (I think!) and do post occasionally but like you, my "posting count" dropped alarmingly a year or so ago - I think this was the cause of someone doing a cull of topics that had been declared deceased or something. Not to worry!

Thanks for all your replies!
Chris, I have also just joined the minimal gauge group on Facebook so hope to get some inspiration from there. Mick, I'm sitting on a train in Bexhill station as I type this!
The baseboard is eight inches by four feet......although I could extend it I suppose! Even four feet gives plenty of scope; I've been trying to decide between an inglenook variation and something with a loop.....I think the loop will win as I've already built more than one inglenook.
I also have an idea for a fiddle track involving doing something with a Peco loco lift but more of that anon.
I haven't done any more modelling (it's been too hot!) although one more thing to comment on......era, I'm thinking of something vaguely modern and to that end I bought a 1:24 kit for a Toyota RAV4 last week; if I ever get around to exhibiting the layout it gives a good size comparison with the rolling stock etc.
Rolling stock......I need to work out what to build on those chassis so I first need to work out what my line will carry.
About to go into a tunnel........!
Simon.
Simon H
Top

I am sure we have met in another place sometime.

I am sure we have met in another place sometime.

Hi Peter,
I think it may have been in more than one place!
Thanks for the welcome,
Simon.
Simon H
Top

I mentioned that I would have to design and build some wagons to go on the bargain chassis.......well on the same trip to Amberley I was able to view and photograph a variety of preserved industrial wagons; here are a few photos of examples I thought might form a basis for narrower gauge wagonry.....
I don't know what the first vehicle was used for as no description was visible due to its being used as a sort of mobile magazine rack!
However, the livery makes me think it was something military and I feel it may have been used for internal transport of some sort, possibly hand-propelled. Its roof is very low, maybe chest height on me...... 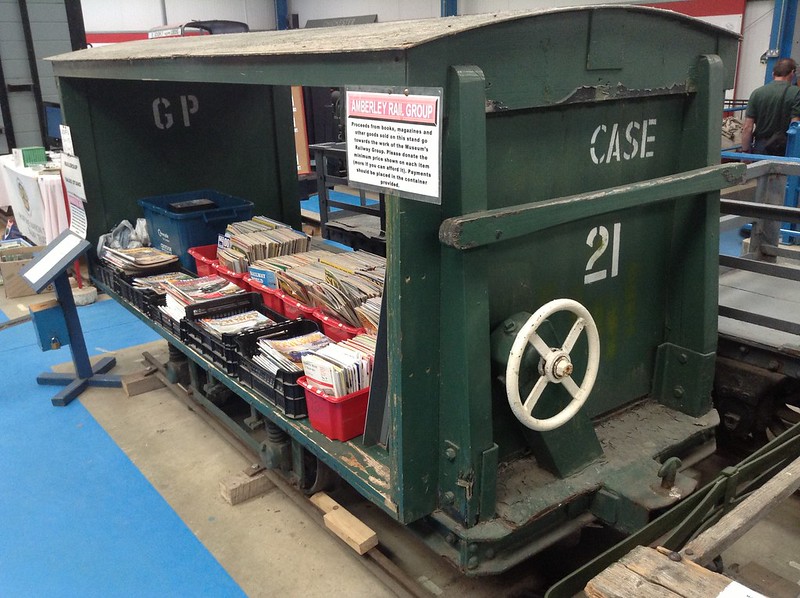 Untitled by Spitfiregoggles, on Flickr
The other two are sub-2 foot gauge hand-pushed clay wagons......I like their diminutive size and fairly basic lightweight construction......the first is from Purbeck: 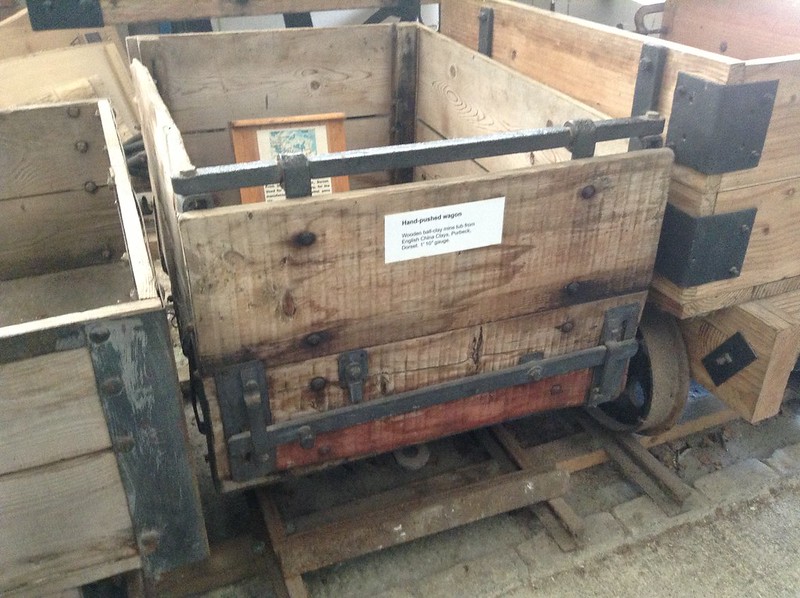 Untitled by Spitfiregoggles, on Flickr
And the second from W.T.Knowles of Halifax: 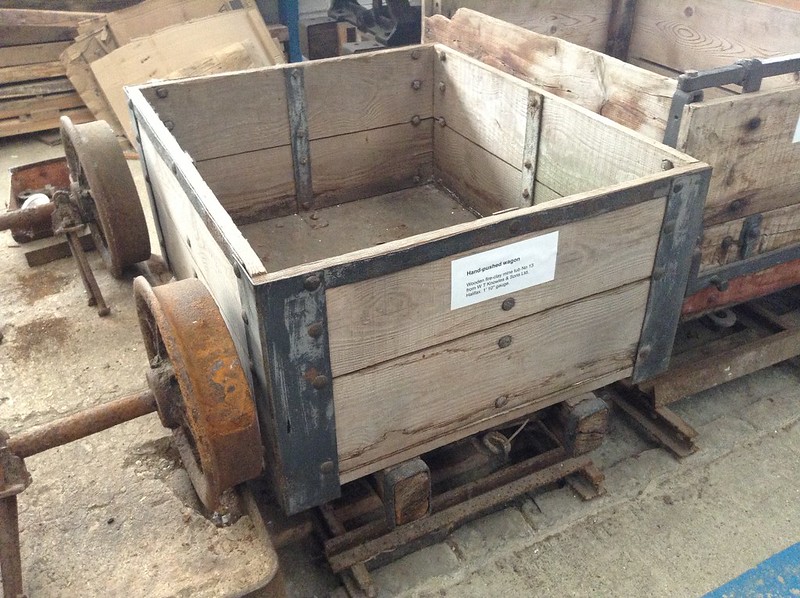 I must get along to Amberly - its on my "must visit" list!

Keep us posted on layout progress

Roger
Keep it on the Short and Gnarrow!
Top
Post Reply
11 posts • Page 1 of 1

Return to “You really ought to gnow your who's wahoo”

Users browsing this forum: No registered users and 1 guest